ACCEPT announce sensational support band for their "Too Mean To Die" Tour!

To rock Europe with the Metal Teutons, we introduce... THE IRON MAIDENS!

ACCEPT are currently taking Amerika by storm on their US Headline tour.
The Iron Maidens came out to the German Metal Titans sold out concert at the
infamous Whisky A Go Go in Los Angeles a couple of days ago.
The 2 bands hit it off, and revealed today that The Iron Maidens will now join ACCEPT on their “Too Mean To Die” European tour, which sets sail from January.

This all girl metal group, who originate from Southern California, rapidly made a name for themselves in the U.S. as an outstanding cover band and very soon after gained a highly acclaimed international reputation. Not only do they possess a hot, rock, feminine allure, they are excellent musicians that deliver a thrilling live show, peppered of course with Iron Maiden ́s Mega hits!
Eddie the mascot even makes a grand appearance on stage!
“We are super excited”, Wolf Hoffmann expressed. “It ́s going to be the
first time for ACCEPT to have an awesome all ladies metal band as support
on a tour! They are great girls and rock like the best, I am convinced they
will heat up the audience for us!”

And what do The Iron Maidens themselves have to say about supporting
ACCEPT for the upcoming tour? "We can't believe we get to tour Europe with the legendary Accept," singer Kirsten Rosenberg beamed. "We aim to melt faces at every single show to give fans an unforgettable evening! The epic Accept combined with the music of Iron Maiden, we trust fans will be very Accept-ing!"

The highly anticipated “Too Mean To Die” tour can be experienced from
January 14th to the end of February with a total of 29 ACCEPT Shows
across 13 countries. 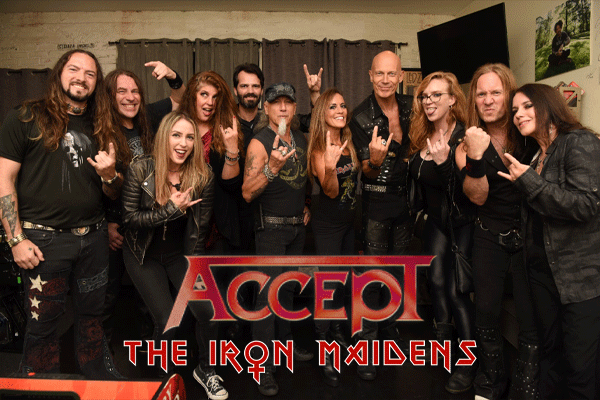