And this great 80's brand is now entering its fourth round live on stage.
Continental Concerts and WE – Live Agency are sending a „heavy“ band package on tour.

The "Triple Thrash Treat" was particularly popular on the show at the time, where three harder combos were featured in a row. This tour version with Vio-Lence, Whiplash and Artillery is already set for a triple thrash treat. Another band, yet to be confirmed, will even turn this year's MTV Headbanger's Ball into a quadruple thrash treat.

Vio-Lence from San Francisco, California might even be the epitome of Thrash Metal. The band, founded in 1985 and active again after a few breaks, defined the genre with albums such as "Eternal Nightmare", "Oppressing The Masses" and "Nothing To Gain". Now they are back violently and brilliantly with new single "Flesh From Bone" and soon EP "Let The World Burn".

Although Whiplash hailing from New Jersey, but have absolutely nothing to do with the Bon Jovi sound. This thrashers set metal standards in the 80's and were well into the 90's as well. The title of the 1998 album "Thrashback" alone speaks for itself. Now it's time for a „thrashback“ again, when they hit the stages in their powerful power trio line-up.

Artillery's Copenhagen command provide a certain European Thrash Metal note. Like their colleagues, the Danish come from THE Metal decade in general - the glorious 80s. With strong power and thrash metal, they've been back as strong as a rock since the end of the 90s and got involved in the mosh pit and the MTV Headbanger's Ball Tour. 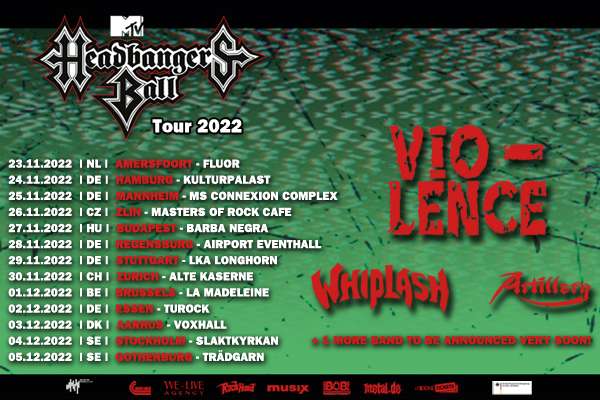